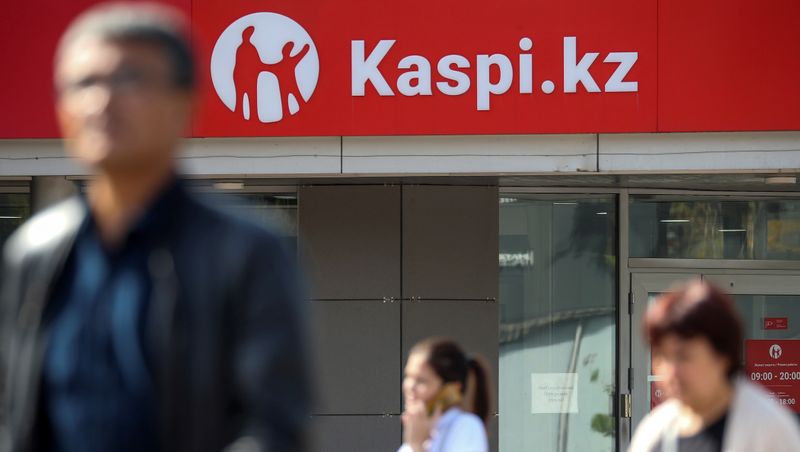 © Reuters. FILE PHOTO: The Kaspi Bank logo in seen at the bank’s branch in Almaty

By Tatiana Voronova and Abhinav Ramnarayan

Kaspi, which previously aimed to raise between $500 million and $700 million from the London share sale it abandoned last year, declined to comment on Thursday.

A source close to the Kazakh firm said Kaspi, which controls the third largest bank in Kazakhstan where it is a leader in payment systems and e-commerce, may want to capitalise on the deal announced this week by Russian technology firm Yandex, which plans to take over online bank Tinkoff for $5.5 billion.

This would set a valuation benchmark for digital banks in countries in the former Soviet Union and Kaspi could proceed with its listing once the deal was finalised, the source said.

Kaspi will stress that its e-commerce business has been a big winner from the COVID-19 pandemic, a second source said.

This month, Kaspi said that its net income rose by 50% year on year in January-June to 115.6 billion tenge ($272 million) on higher revenue and margins.

A third source said Kaspi, whose popular mobile app has made it a household name in the oil-rich Central Asian nation of 19 million, could press ahead with the listing in the coming weeks.

The second source said the listing could be announced in the coming days with the aim to get it done before November’s presidential election in the United States.

Citigroup (NYSE:) and Morgan Stanley (NYSE:) are among the banks involved in the deal, the second source said. Morgan Stanley declined to comment and Citigroup did not respond to a request for comment.

Commenting on the Yandex-Tinkoff deal, Kaspi said it owed its success to its strategy “which combines everyday payments, e-commerce and digital finance services” in its app.

“This Ecosystem approach is now being replicated by leading internet businesses around the world and it’s no surprise to us therefore that Russia’s best technology companies are attempting to replicate something similar themselves,” Kaspi.kz said.

Disclaimer: Fusion Media would like to remind you that the data contained in this website is not necessarily real-time nor accurate. All CFDs (stocks, indexes, futures) and Forex prices are not provided by exchanges but rather by market makers, and so prices may not be accurate and may differ from the…

Gold Price Prediction – Prices Dropped as the Dollar Continues to

‘One of the most confusing weeks of my career’

The company that coined the term ‘hash rate’ is not…

U.S. only at ‘the beginning of the steep part’…

Impending pennant breakout sets Bitcoin price back on the…

Germany’s central bank is working on a blockchain project,…

Covid cases in the U.S. are ‘extremely high and quite…